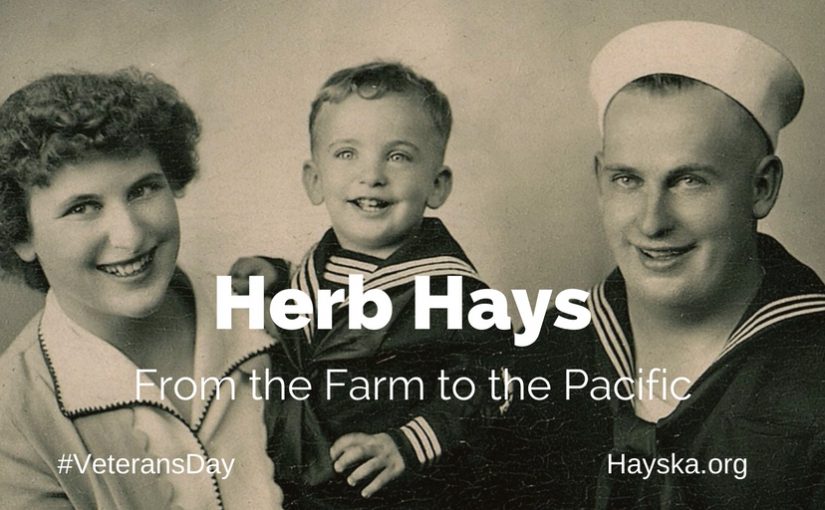 It started with a photograph. The image behind the blog title includes my father and his parents. (1) Dad is in a miniature version of Herb’s navy uniform; and, I wanted to find out more.

Using a combination of interview, newspapers, and muster rolls, I pieced the story together that took Herb from the farm in Ogle County to the Harbor of Japan in the final months of WW2.

He spent his first year of service at the Great Lakes Naval Base, north of Chicago. He traveled home at least twice during the year to visit family.

Another story that Grandma Avis told about Herb was that Herb heard Bill’s first words over a phone call. The family is unsure during which point of his service this call occurred. (3)

In May 1945, the USS Habersham was commissioned, and Herb joined the crew as a Motor Machinist’s Mate first class, service number 9451066. He was a part of the crew that joined from the recruiting station in Houston, Texas on 12 May 1945. (6)

“During World War II, the USS Habersham was assigned to the Asiatic-Pacific Theater.” (7) Herb grew up on the family farm in Polo, Illinois and would travel to the Port of Japan aboard the cargo ship.

Following shakedown training off Galveston, the cargo ship sailed 2 June for Gulfport, Miss., to take on cargo and departed 4 days later to join the Pacific Fleet, then pressing ever closer to Japan. Habersham arrived Pearl Harbor via the Canal Zone 30 June, unloaded her cargo, and returned to San Francisco with passengers and cargo 12 July. She then loaded cargo and sailed 21 July for Eniwetok Island where she arrived 7 August. (8)

On September 6, 1944, Herb’s rating was changed to Motor Machinist’s Mate third class to fill a vacancy in ship’s allowance (9)

Habersham was at Eniwetok when the surrender of Japan was announced, and departed 9 September to carry cargo for occupation forces in Japan. Arriving Tokyo Bay 17 September, she unloaded cargo and departed for Guam and San Francisco 27 November. (8)

The only image I found of the USS Habersham was from after it was decommissioned from the Navy. It gives you an idea of the size of the vessel.

3 thoughts on “Herb Hays: From the Farm to the Pacific”