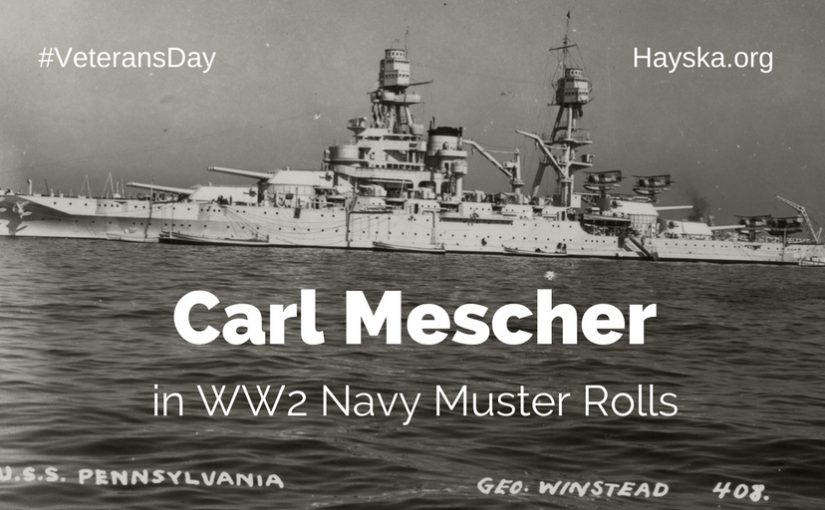 We can use the WW2 Navy Muster Rolls to follow our ancestors through their WW2 navy careers. While conducting my research, I saw two types of reports in the muster rolls: a full crew list submitted at the end of a quarter and a list of crew changes that was submitted at any time. Digital images are available on Ancestry and Fold3.

According to the 31 Oct 1940 muster roll (2), Carl Edward Mescher enlisted on 23 Jul 1940 in St. Louis. The report indicated that Carl was received onboard the USS Pennsylvania for duty on 12 Oct 1940 from the Naval Training Station (NTS), Great Lakes, Illinois. His service number was 3373442 and his initial rating was AS.

For help with the rating designations, I found a list in Wikipedia. According to the article, AS stands for “Aviation support equipment technician” who “performed intermediate maintenance on aviation accessory equipment at naval air stations and aboard aircraft carriers. They maintained gasoline and diesel engines, gas turbine compressor units and electrical systems.” (3)

Nov 1940 writing of the report, the ship was in Bremerton, Washington.

Because “Sea” is not listed separately in the Wikipedia list, I consulted another list of navy ratings in Bluejacket.com. “Sea” may stand for Seaman and appears to be a more general designation used during training. (5)

In the 30 June 1940 quarterly report, Carl is listed as Sea1c. A change report indicating the change from Sea2c to Sea1c was not included in the search results.

The most vivid picture of the war is provided by the change report issued on 12 Dev 1941, after the attack on Pearl Harbor. (7) It lists the dead, injured, and missing. We count ourselves fortunate that this is one report that does not list Carl’s name.

I first heard Carl’s description of the attack back in 2006, with my husband, David. (8)

Carl was aboard the USS Pennsylvania while it was in drydock 1 at Pearl Harbor, Hawaii, the day of the 7 Dec 1941 attack. Carl was sleeping in because he wasn’t on duty. When they called general quarters, Carl went to his battle station in auxiliary steerage. He was able to hear battle sounds through a private line from the bridge. Since the Pennsylvania was in drydock, they couldn’t move. After a while, Carl was released to go fight a fire on a neighboring destroyer. On the way, he came across one to two bombed out holes. On the destroyer, they had him pouring water into a hole to keep the live torpedoes cool.

He stayed there until he saw three horizontal bombers approaching and dropping denotation bombs. His description of evading these bombs is confusing, but he was able to avoid injury. He admits that he doesn’t remember many details of the rest of that day.

Carl recognized that the relocation of the ship to drydock saved the ship. Since the USS Pennsylvania was the fleet flagship, they would have normally been in battleship row. That berth was bombed at a depth that would have sunk their ship. But, the ship that was anchored where the Pennsylvania would have been also didn’t receive much damage. It was a smaller profile, so the bombs and torpedoes missed the ship.

By the end of 1942, he had transferred to the USS Pennsylvania Aviation Unit with the same designation. (10)

Then two months later, he was made an ARM2c (12). Based on the station, this could have been an aviation radioman.

On 4 Sep 1943, Carl was transferred to the US Naval Hospital at Aiea Heights in the Territory of Hawaii for treatment. (13) He stayed a month before being transferred back to the USS Pennsylvania Aviation Unit. (14) This story behind this transfer did not come up during the 2006 interview.

At the beginning of 1944, Carl’s rating was changed to ARM1c. (15) Shortly thereafter, he was transferred to the USS Colorado FFT to Pre-Radio School for a course of instruction. (16) I am not sure how long Carl was stationed on the USS Colorado because a change report listing his transfer off the ship wasn’t included in the search results. Since he wasn’t listed in the quarterly report for the USS Colorado on 31 Mar 1944, he probably stayed aboard for a month or less. (17)

The muster roll images in Ancestry for the Pennsylvania Aviation Unit skip March 1944 to March 1945.

The final search result is for Carl’s transfer to the Naval Aeronautical Lab at Banana River, Florida. (18) The notations in column B and C were “ACETMA” and “TRANPSC JAX FLA,” respectively. I haven’t yet found a description of what these designations may stand for.

I can review the other muster rolls for sailing details that didn’t appear on the reports where Carl was listed.

I can also review scans of Carl’s flight log book for more details of what happened between January 1943 and July 1946 when he was with the Pennsylvania Aviation Unit.

The available muster rolls do not list a discharge date.

This is a snapshot of just one’s person’s service. I appreciate the contributions of all the men and women who have served.

Come back tomorrow for a profile of my grandfather, Herb Hays, as he joined the navy and traveled from the farmland of Illinois to the coast of Japan.