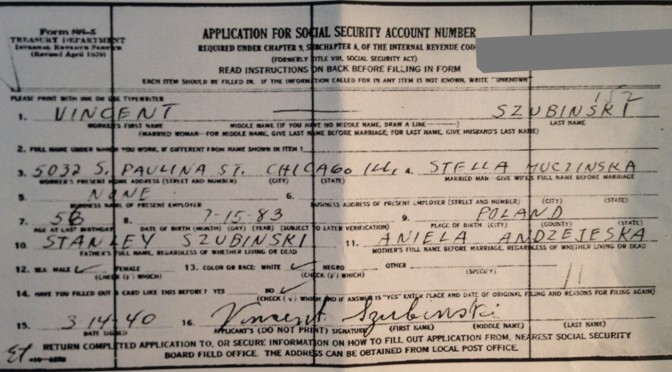 It was very exciting when I received the Form SS-5 copies of the social security applications for Vincent Szubinski and Peter Anthony Smasz.

For Peter (1), the form supplied a middle name that I had never found before. The names of his parents were the same as recorded previously except for his mother’s last name. Sophia Wojcik was listed in the Form SS-5, while Sophia Blizniak was listed in Peter’s death certificate. Since the Form SS-5 was completed 30 years earlier and by Peter instead of by another person, as in the death certificate, I set Wojcik as the preferred name in FTM.
Vincent’s Form SS-5 (2) led to even my exciting findings. Because Stanley Szubinski and Aniela Andrejeska were listed as his parents I was able to finally make a connection to records on another site. The Poznan Project (3) is transcribing “the 19th century marriage records from the historic Greater Poland (then Prussian Province of Poznan) into a searchable online database.” A search for Stanley Szubinski and Aniela Andrejeska found a 5/1861 entry for Kawnice parish west of Konin with Antoni and Antonina Putrzak listed as Stanislaw Szubinski’s parents and Andrzej and Agnieszka Grabowska listed as Aniela Andrejeska parents. With one form I was able to make other connections and move two more generations forward. I also have a parish to focus my searches instead of a larger region.