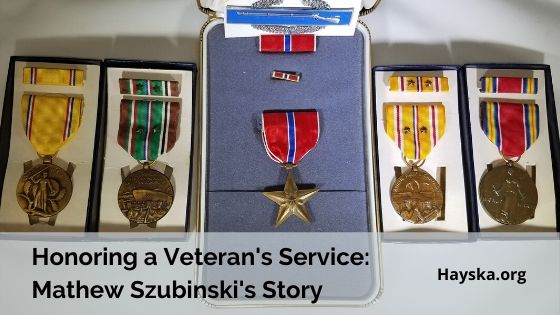 In recognition of Veterans Day, I wish to honor his service in the army of the United States during World War II from 1941 to 1945. (2) At the time of Mathew’s enlistment on 9 May 1941, he was divorced and working as a retail manager/salesclerk. Based on his military records, I learned that he served in the following battle and campaigns: Rhineland, Central Europe, East Indies, and New Guinea.

Some of his military records were destroyed in the St. Louis Archives fire, but his discharge papers list that he served in the Pacific theater between 1942 and 1944, the European Theater in 1945, and spent some time in the hospital for non-combat concerns.

Because the copies of his military record show burnt edges and water damage from the fire, it is difficult to read the details. I may not be able to learn more details of his service from his written record. But his medals that my mother inherited tell a part of the story.

Using the, “Enlisted Record and Report of Separation” form from his military record, I was able to match up some of the medals to those listed under decorations and citations: American Defense Service Ribbon, European-African-Middle Eastern Theater Ribbon w/ 2 Bronze Battle Stars, Asiatic-Pacific Theater Ribbon w/ 2 Bronze Battle Stars. His medal collection also includes a World War II Victory Medal, 2 Good Conduct Medals, 2 Combat Infantryman Badges, and a Bronze Star with “Heroic or meritorious achievements: Mathew E. Szubinski” on the back.

One of the Combat Infantryman Badges had been made into a belt buckle and is currently very damaged. He served as a Rifleman and was promoted to Corporal before he was honorably discharged. At the time of his discharge he was with 3rd BN 417th Infantry.

Mathew died as a widower on 3 October 1991 in Chicago, Cook, Illinois. (3) He was buried in Resurrection Cemetery two days later. (4, 5) His occupation was listed as a cabinet maker for Hines Lumber.